War Thunder released an update this week, version 1.35. It’s got the usual patch gubbins: new maps and planes, tweaks to cockpits and armaments, that sort of thing (full details in the change log). Something I’m particularly enjoying so far are Events. Aircraft in War Thunder are arranged into ranks roughly by their capabilities rather than strict dates to try and avoid mismatches (it’s not perfect, but the matchmaker does a decent job most of the time), and though Historical Battles limit the nationalities involves you can still end up with rather ahistorical fights like 1942-era British and American aircraft taking on the Russians in Korea, land based aircraft on naval maps and vice-versa, and significant numbers of Premium aircraft based on prototypes or one-off instances of captured aircraft. It’s fine in game-terms, but events offer something slightly more interesting historically.

You can still hit the “To Battle” button as normal, but there’s a new button on the screen, Events: 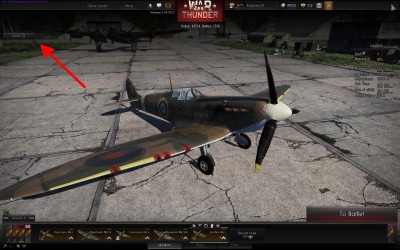 Click this for a list of available events. Currently there are three available at any one time, and they change each day, though I imagine both those parameters can be tweaked. The really, really important thing to notice here is that events can be Arcade, Historical or Full Real, currently there’s one of each per day. They can also have slightly tweaked rulesets, for example an Arcade Battle but with no respawns. The difficulty level isn’t quite as obvious as it could be, so there are reports of people joining in a Full Real Battle without realising it, resulting in a lot of crashing on take-off (via Reddit). Note the difficulty at the top of the event screen! 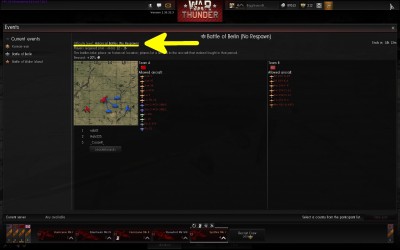 Events are (broadly) historical scenarios, with a limited selection of aircraft available based more on actual combatants than in-game ranks, as shown in the list on the event screen. Planes are colour coded: red if you don’t have sufficient rank in that air force, dark yellow if you’re high enough rank but haven’t bought it yet, bright yellow if you own it. For Historical and Full Real battles you just pick the one you want to use as normal, for Arcade you only need one qualifying aircraft to take part, but you’ll be more effective if your whole hanger is eligible. Arcade teams are also still mixed nationalities.

I’m finding the events a fun way of mixing things up between different levels, countries and difficulty modes, well worth a look.