The Chalke Valley History Festival is a week long combination of a literary festival, featuring talks and debates with many leading historians, and living history encampment, with re-enactors from Romans and Vikings to World War II and myriad periods between. I saw a piece about it on the local news; sword fighting school, a World War I trench and an air show with Spitfires? Perfect!

Unfortunately, only finding out at the last minute, many of the talks were sold out; I would’ve particularly loved to see Eric “Winkle” Brown in person. Still, we toddled off through beautiful rolling countryside to the festival site in the depths of Wiltshire, and the English weather was good enough to to forget it was supposed to be turning Glastonbury into a mudbath.

Not all of the talks were completely booked, there were spaces in many of the morning sessions, so I went along to see “ACHTUNG! Commando Comics”, editor Calum Laird talking about the history of the comic from its first issue in 1961 to present day digital distribution (with great foresight, the comic is about the same size as an iPad screen), and how an issue is put together. Taking advantage of the venue, a parade of re-enactors covering just about every theatre of World War II lined the stage, including a couple of Commandos able to display the real Fairbairn-Sykes dagger present on the cover of every issue of the comic.

Wandering around the festival presented some fantastic scenes, I’m not sure where else you’d see a troop of Napoleonic soldiers marching past a group of Regency dancers being watched by a Waffen-SS Hauptsturmführer eating an ice cream. A group of Plantagenet re-enactors demonstrated weapons and armour from various phases of The Hundred Years’ War: 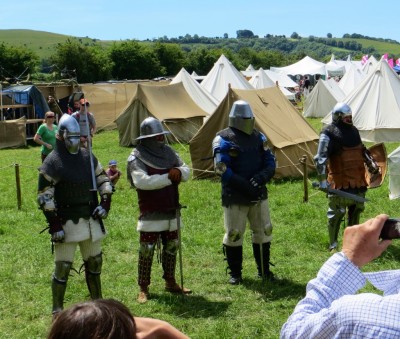 Is there someone else up there we can talk to?

It was quite warm enough wandering around in a pair of shorts, I can’t imagine the heat under the padding and multiple layers of armour they were in. If you were inspired by what you saw there were plenty of stalls selling all manner of arms and armour, from full size helmets and pikes to wooden swords and shields for kids.

Lunch was accompanied by a Hurricane IIc of the Battle of Britain Memorial Flight, and a couple of hours later the airshow kicked off with a Hawker Sea Fury, followed by a World War I dogfight between a Junkers CL1, Sopwith Triplane and a couple of SE5As, then three Spitfires Mk IXs, one solo, another pair arriving in formation with a Hurricane and Messerschmitt Bf 108. Jon from How To Murder Time had a suitably large lens and got some magnificent shots: 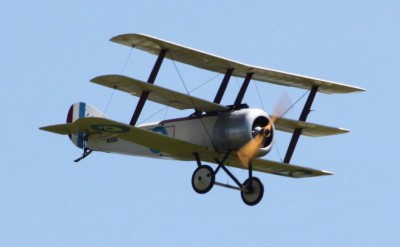 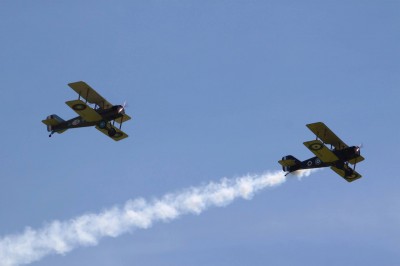 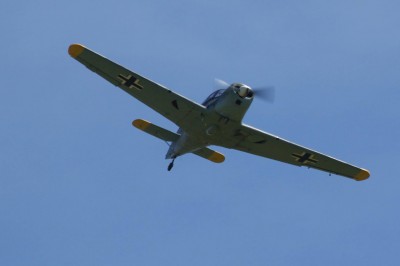 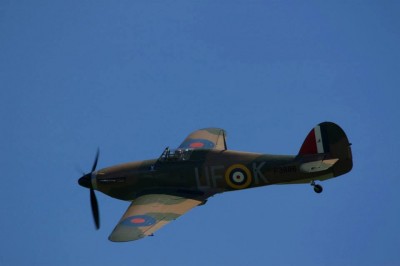 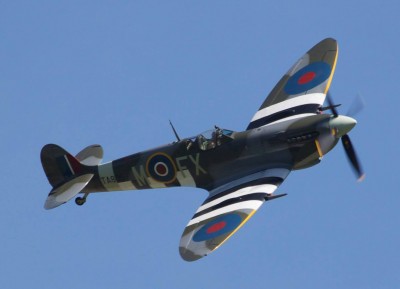 All in all a really excellent day out, and I’ll be keeping a close eye for announcements about next year’s event.