World of Warplanes, the aerial companion to Wargaming.net’s World of Tanks, is currently in beta. Obviously. Everything online is in beta; I think the last game to receive an official release might have been Ye Worlde of Cheſs in 1486, after the 0.9.7b patch that buffed the initial move distance of pawns. It makes sense in a mutable online world to test early and often with a realistic user base, and a gradual increase in population is far less stressful for both developers and servers than dropping a whole bunch o’ people from launch-day height, but “beta” now covers a multitude of sins, from “proper” testing to previews, stress tests, head starts, soft launches and such. Google were always a prime culprit, and Neverwinter is the most recent of numerous games (including War Thunder) to move to an “Open Beta” where, unless I’m more vastly mistaken than a man who believes Hillaire Belloc is still alive, you can buy stuff and there isn’t going to be any progress wipe before “launch”. It’s hard not be slightly cynical of the ubiquity of the “beta” tag, not least as it provides a handy cudgel that some forum warriors love to beat dissenters with; “Of course the current version of the game erases your entire hard drive and hijacks your Facebook account to send ‘make money fast’ spam, IT’S A BETA, DUH!”

World of Warplanes is in Closed Beta (you can apply for entry on the website); I don’t believe you can spend money on it and I wouldn’t be surprised if there are progress wipes, so it’s closer to the “actual testing” end of the beta spectrum than “well, we’ve sort of launched, unless something goes wrong, in which case we haven’t and you can’t have your money back”. The NDA lifted about a month ago, but I’ve only been in for a week or so, playing a few matches at Tiers I to III; take the following with an appropriate quantity of early-impression-beta salt.

WoWP doesn’t have a tutorial at the moment, but you can practise a bit in a 2-vs-2 fight with bots to get the hang of things before facing the terror of human opponents. The visuals are nice, having been buffed up in a previous update: 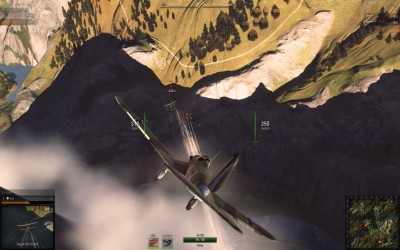 It’s very much a drop-in action game rather than serious flight sim; third person (or third aircraft?) view, simple controls, target and lead indicators, no faffing around with 20 switches just to start up the engine. Matches start with all players in the air, flying around a fairly small map containing a smattering of ground targets; shoot down the enemy aircraft, strafe and bomb stuff on the ground, and win! Or lose. One of the two. Both air and ground targets are able to soak up a fair amount of fire, especially from your starting armament of a pair of small calibre machine guns; you get to tool up with cannons, rockets and bombs in later aircraft, but if you’re stuck with machine guns against a higher tier heavy fighter their health bar takes an awful lot of whittling. Flying with keyboard and mouse works well enough, though the controls feel a bit heavy; gradually lining up on a ground target from a distance is pretty straightforward, getting an enemy plane in your sights is tricky. I haven’t tried it with a joystick, as I fear my stick manipulation skills have atrophied since the days of X-Wing. Collisions are commonplace with (in descending frequency order) friendly planes, enemy planes and the ground, at least in Tier I when most players are wearing metaphorical L-plates (note to devs: maybe add L-plate decals to the customisation options).

Between battles the hanger interface is highly reminiscent of World of Tanks, as you’d expect. You start with a Tier I aircraft from each of the current countries: Germany, USSR, USA, Japan. No Britain. That’s OK, though, I’m not going to launch into some spittle-flecked rant; they’ve said that the British will be the next nation added, and though no timescales have been mentioned I’d be surprised if that wasn’t during Open Beta or soon after launch. Everything’s fine, we know the World of… games happen in an alternate timeline, no need to start subtitling a Downfall parody just yet.

Unless they were lying and put a French tree in next…

Anyway! You have three options for each plane: 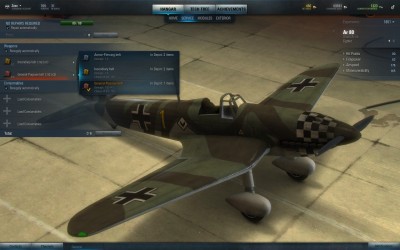 Service, for repair and rearming

Under Service you can repair, and resupply ammunition with a choice of Incendiary and General Purpose as well as the default Armour Piercing. Upgraded ammunition costs Credits (i.e. currency earned in-game), I’m not sure if that’s just the case during beta or if it’s a way of avoiding the “pay-to-win” accusations levelled at Gold (i.e. bought with real money) ammunition in World of Tanks, prior to the changes that allowed it to be bought with Credits as well. 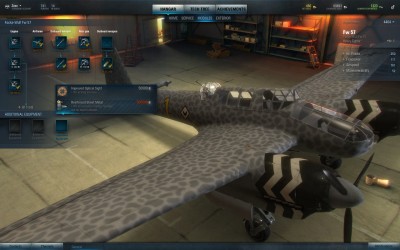 Modules shows the main components of the plane (airframe, engine, guns etc), with upgrades that can be unlocked with XP and purchased with Credits. “Additional Equipment” includes extras to boost the accuracy of guns or toughness of the airframe. As with World of Tanks there’s quite a difference in capability between a fresh-out-of-the-showroom runabout and a fully upgraded deathkite; the Fw 57 in the screenshot starts with a pair of 7.92mm machine guns and no bombs, a line-up of aircraft gun cartridges gives an idea of how much more metal it chucks out after upgrading the MGs to 20mm cannon, and a single 100kg bomb makes short work of ground targets. 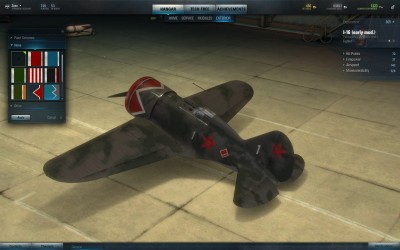 Exterior, for changing the paint scheme

Exterior allows you to tweak the colour scheme of your plane with options for the main camouflage and further highlights or decals around the nose. Camouflage costs Gold in WoT but seems to be free at the moment in WoWP, I wouldn’t be surprised if that changes for release.

All in all, it’s a solid game, worth a look if you fancy some drop-in WWII aerial combat.

There is a war-elephant in the thunder-room, though; Gaijin’s War Thunder. I’ve avoided comparisons in this post to try and give World of Warplanes a fair crack of the whip but the games are very similar, so I’ll try and do another post looking at the two games.