I’ve been having a tremendous amount of fun in War Thunder, and would highly recommend it to anyone who likes either War or Thunder. Actually, on reflection, more the War than the Thunder; there are clouds, and sometimes rain showers, but I haven’t heard a sonic shock wave caused by lightning in the game yet so fans of meteorology should look elsewhere. If you’re after a bit of mutliplayer online World War II flightsim action, though, give it a go.

Update as of 12th June 2013: the account sign-up process has been improved to check for existing names and let you specify a password; the introduction to the game for new players has also been overhauled, a fully updated post is coming soon.

First step is to sign up for an account at warthunder.com. Couple of things to watch out for: you might get a big green tick next to your chosen nickname and think “Hurrah, nobody else has tried to be ‘Biggles’, I’m unique!”, but the system just slaps a number on the end if the name is taken, so you end up as ‘Biggles2’ (or, quite possibly, ‘Biggles146’). Also, you don’t choose a password at sign-up time, the system sends you an e-mail that includes your password; you might want to double check your spam bin if it doesn’t seem to turn up. Both nickname and password can be changed in your YuPlay profile, so you can correct your nickname to ‘B1gggl3z’ and password to ‘password’ or ‘1234’.

Next, download the client. It’s 7Gb+, so might take a while. Tum te tum… is it still downloading? Yes? Right-o. Pom de pom… Nice weather we’re having, isn’t it? Oh, it’s all installed now? Splendid.

The first time you launch the game it asks if you want to run through a tutorial, which is a very good idea if you’re new to flight simulators, or haven’t played one for a few years. There’s a series of tutorial missions covering basic flying, taking off and landing (in other words, not only going up diddley up up, but also down diddley down down), ground attack etc., mostly very useful, though I’ve never had to land on a carrier in a mission yet (thankfully), so don’t panic if you have a bit of difficulty with that one. 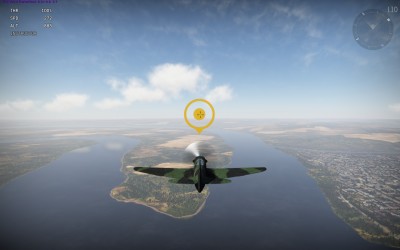 The tutorial: save the world from the scourge of giant yellow floating circles!

If you want to get straight in to action and skip the tutorials, or if you ever want have another go at them for some more practice later, you can always access them later from the “Game Modes” menu under “Tutorial”. There are three basic tutorials for the three aircraft types, and advanced tutorials for take-off and flight control, aerial combat and landing, carrier take-off and torpedoing and dive-bombing and carrier landing. You can also re-run the tutorials at different difficulty levels, if you want to step up to Realistic or Simulator mode sometime. As well as introducing you to the main game concepts you also earn some in-game currency from completing the tutorials, so they’re worthwhile even if you’re a veteran flier.

Speaking of in-game currency, like many games of this type there are two varieties: ‘Silver Lions’ are earned from playing, ‘Gold Eagles’ are bought with real money (though you’ll earn some Gold Eagles from the early tutorials). Don’t worry too much about that for now, but you might want to save up Gold Eagles until you’ve a better idea how you might like to spend them.

Once you’ve mastered looping the loop and defying the ground in the tutorials you can select your preferred nation and review the magnificent array of flying machines that make up your personal squadron. I’m using Britain, naturally, and if you were expecting to jump straight into a Spitfire you might be slightly disappointed to be starting off in a Hawker Fury, an open cockpit biplane, but like most aircraft in the game they do have actual combat pedigree from World War II; Håkans aviation page is a rather interesting place for information on biplane aces. 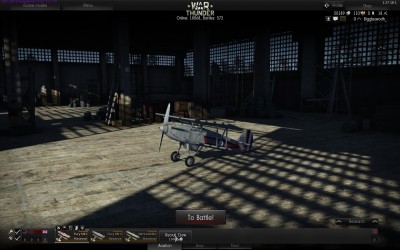 Before hitting that tempting “To Battle” button it’s worth grabbing another plane. If you completed the tutorials you should have some money, so click “Recruit Crew” to buy another crew for 10,000 Silver Lions; you can either stick this crew in another starter fighter (click the “Nimrod Mk. II (Reserve)”), or, for a bit of fun, let’s see if there’s something else we can get by clicking on the “Research” button. 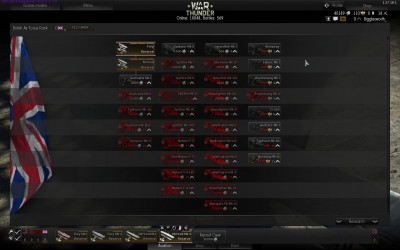 This takes you to the tech tree for your nation, all the lovely stuff you’ll (eventually) be able to fly. Have a browse of what’s available; the right hand column starting with the Wirraway are premium aircraft, purchased with real money Golden Eagles, the rest you can buy with Silver Lions (the first icon under the name of the aircraft shows the type of currency). The number in the bottom right, next to the silver chevron, is the rank you need to be to fly them; you gain XP from battles, and what do experience points make? Prizes! Also, air force ranks. At rank 2 we’ll be able to get that Hurricane Mk I, but even at the dizzying heights of rank 0 there’s something for us in the Swordfish Mk I, the venerable Stringbag. Click “Order”, and put it into service. 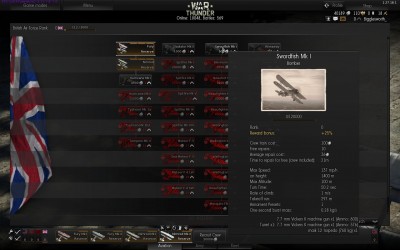 Now we can go shoot people! You can fly against AI opponents if you like via the “Missions” option under “Game Modes” in the top left, but the online PvP battles are the main focus. Click “To Battle” and, unless you’re feeling incredibly confident, leave it with “Arcade Battle” selected. One setting that you might want to change, at the top there’s a “Current Server” option; for the shortest possible queue you can change this to “Any available”: 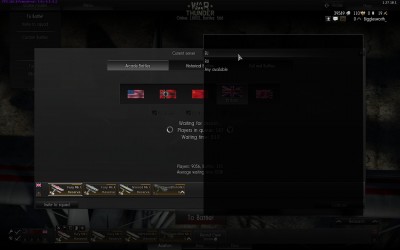 Fighting alongside (and against) players on the Russian doesn’t seem to be a problem, I haven’t encountered any latency issues; you might not be able to understand general chat, but there are probably disadvantages too. Should some sort of tactical co-ordination be desirable you can always issue voice commands/requests in game via the ‘T’ key by default, or you could just shout detailed battle plans at your hamster for all the good it’ll do in a team of random strangers. Click “To Battle” again in the bottom right of the window.

After a (hopefully) short queue and a loading screen, you’ll get this starting screen for the battle: 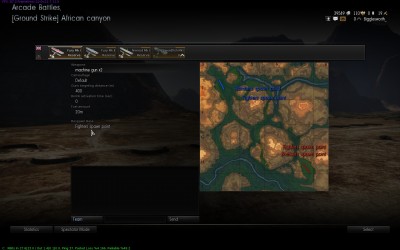 At the top are your available aircraft; below the selected aircraft you can change its weapon load-out (if there’s more than one option), its camouflage paint scheme (if there’s more than one option), and stuff like the gun targeting distance (if you can be bothered; I don’t think targeting distance affects Arcade mode anyway). Don’t worry about those for now. To the right is the map over which you’ll be fighting, with the fighter and bomber spawn points highlighted. I wouldn’t worry about that too much either, we’ll just point ourselves in the vague direction of the enemy and hope.

Pick which aircraft you want to start off with; I’d suggest one of the fighters rather than the Swordfish, but I don’t think there’s any difference other than cosmetics between the Fury Mk I, Fury Mk II and Nimrod (a naval version of the Fury). Click “Select” in the bottom right corner, and after a countdown it’s chocks away and time to deliver the bacon! (Except you don’t have to worry about the chocks, as you start in the air in Arcade mode rather than having to take off).

Cabbage crates over the briney!

I’ll get on to highly advanced combat tactics in Part 2, for the time being: red dots on the ground are enemy vehicles (shoot them). Red dots in the sky are enemy aircraft (shoot them). Blue dots are friendly (don’t shoot them). Keep shooting things until either (i) all the red stuff is gone or (ii) you explode. If (i), congratulations, you win! If (ii) you return to the aircraft selection screen; pick your next plane, hit “Select” again, and return to the fray! Repeat (ii) until either (i), or all your aircraft have exploded.

If you find yourself on a map with ships, the torpedo mounted on the Swordfish will come in very handy (see the torpedo tutorial for how to employ it; short version: fly at low altitude, press space bar when pointing at enemy ship), but I don’t think you will have naval targets until you’ve gained a few ranks, so if you select the Swordfish you might as well hit space to get rid of the torpedo straight away and improve performance a bit. (I tried using the torpedo in a ground attack role, but there was just a bit of a ‘clang!’ as it bounced off an armoured car, not very effective.) More usefully, the Swordfish has a rear gunner, controlled by the AI by default; the AI isn’t a very good shot, though, so you might be better off taking control of the gun yourself by pressing F6. When you do, the plane will continue flying straight and level, so make sure you’re in a nice open bit of sky and not, say, at tree-top level with a big old mountain straight ahead. Wave the mouse around to control the gun, and give that bandit on your tail what-for.

That should get you through your first few battles, see Part 2 for an introduction to the two main Arcade battle modes.