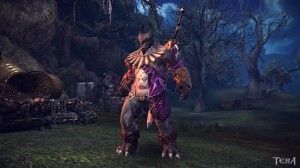 My time in Tera has come to an end for the time being, but I just wanted to make a quick post for all the dance fans out there. Here’s my Aman Slayer in the latest armour he’d been granted. Ooooo yeah. He just needs some fake tan and he’s all set to appear on Strictly Come Dancing, don’t you think? I’m sure someone somewhere thought it’d be fun to have Aman males look like they were the Hulk bursting out of a clown costume, but I have to say it wasn’t really a style that appealed to me.

<deepvoiceover>
“In the grim black darkness of the forest night, only one man stands against the forces of evil.

And he’s wearing a ruff.”
</deepvoiceover>

And for the squee zomg cute! fans out there: I already thought the Popori were a rather adorable race –although perhaps somewhat out of place set against the grim dark ruff-wearing races of Tera– but I think the zomgcute-o-meter almost broke a needle when I stumbled upon my first Popori youngling; reminds me somewhat of the Gibberlings from Allods, which is still the most deeply splendid concept for a playable race that I’ve experienced in an MMO to date.

I’ve definitely enjoyed my time in Tera, it was an experience worth having, and as Bhagpuss points out, there’s a trial to be had if you were interested in Tera but didn’t want to fork out for the full box price. However, I’m not convinced it’s the best way to showcase a game like Tera: the tutorial is fairly mundane, with very few, if any, of the game’s BAMs (Big Ass Monsters) to really let the combat shine, and using Gaikai’s streaming client means that the graphical quality is degraded far below the native client’s stunning resolution; perhaps better to wait for a free trial through the native client, for those who are still curious about the game.

I think Tera is marketed at quite a specific audience, and I’m not really part of that demographic, but I have to say I was still pleasantly surprised by some of the elements I found during my time in this curious and somewhat controversial game.