As usual I’ve spent a large part of my time noodling around in the character creator during Guild Wars 2’s current beta event. I think I’ve got my characters planned, a Norn Guardian and a Charr Warrior, with the Guardian being my main. Of course m’colleague will snort merrily at this and tell you that I will, therefore, be playing a Sylvari Thief come release. I am certainly well enough aware of my altitus to not be able to rule out such a situation occurring.

The one saving grace for my Norn is that I’ve managed to create my own denizen of Rivain (because nothing helps immersion in a fantasy RPG like a genre mash-up), which will be hard to give up. This is helped somewhat by the default town clothes for the female Norn complementing the desired guise so terribly well. I present the following exhibits as evidence: 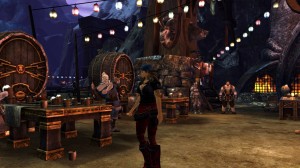 I’ve played through some of the early levels to get a handle on the various classes, and I’ve raised a few bug reports, so I have to say that I feel my time in the beta was both worthwhile and enjoyable. The game clearly has some work to be done, but then for all we know we may not see a release for six months or more. I think the important thing to consider is whether the lessons of beta have been learnt, the outcome of which will become clear when the next beta takes place. Regardless, I’ve seen enough –even in its current condition– to know that I will be playing the game for some time, and that it will probably become my new World of Warcraft or Lord of the Rings Online – games which have both served me well for five or more years of play, on and off.

I can’t really report much on the game content as such, because I didn’t advance terribly far with any one character; I have no intention of playing through it all again come release – O, that way burnout lies. I’d rather save the content for when I can savour it, knowing that any progression my character makes will actually count for something.

The beta simply hasn’t changed my opinion for better or worse – I think that Guild Wars 2 will be a great game, that I will get a lot out of it, and that ArenaNet will have a very solid foundation on which to continue building their Guild Wars franchise. Is it going to change the world? No. Is it going to be a very strong player in the MMO market and influence those theme park MMOs which follow it? Yes, I do believe so.

I still regret not having involved myself in the original Guild Wars culture, and I don’t intend to make the same mistake a second time. The thing with Guild Wars is that it’s more than just a game – it is a community. Much like I find the game-play of EVE not to be for me, I can still admire the community. And I do. The devoted passion of EVE’s players is something which I also recognise in the Guild Wars community, as well as in the team at ArenaNet, and I feel that it is this passion which is intrinsic to the best of MMO experiences.

MMOs are more than just the games we play, they are the communities which form around the games, and this is what should make them different and special. Somewhere along the way we seem to have lost this depth of community. Perhaps the player-base has been spread too thinly with the wealth of MMO choice in recent years; perhaps developers have failed to instill, or even enable, an appropriate sense of community within their player-base; perhaps players have been spoilt by the bigger MMOs, and a sense of selfish entitlement precludes a solid community forming. Certainly the latter point is my main concern for Guild Wars 2 at the moment, the sense of entitlement and complaint over the issues found in the current beta have been… excessive, to my mind. Wanting to have your issues resolved is entirely understandable, but the foot-stamping, nappy-flinging, red-faced wailing that occurs amongst a certain set of players every time they don’t get an absolutely immaculate MMO experience, or find themselves hindered by an issue for any longer than a nanosecond, casts the MMO community as a whole in a terribly bad light. It is healthy to lust for perfection, but only deranged fanaticism could demand it unconditionally.

So, Guild Wars 2: so far as I can tell it’s a great game, one which will not shake the foundations of the genre, but will almost certainly strengthen them; we’ll just have to wait and see if it develops the solid community it deserves to go along with that.