April 10th is just around the corner, and I’ve been dabbling in Guild Wars: The Original Series.

During my initial foray I was very pleased to see that ArenaNet can indeed make splendid-looking female armour without it needing to include a mini-skirt, bra, nipple tassels, thong, fishnets, Lycra leotard or nothing but a small strategically placed fig leaf. 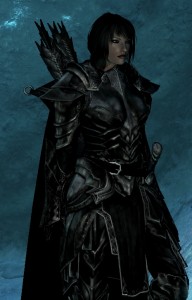 Of course, if you want it, you have to buy it from the Guild Wars store.

I’ve also found a new lease of life in Skyrim, with various mods which improve character appearance, as well as the addition of cloaks and other cosmetic niceties, providing a new reason to go adventuring in Tamriel’s wintry province.

All of which is free, and makes me feel somewhat guilty, because I’m happy to give a little extra to ArenaNet seeing as their game and its series of expansions seems worth more than the box prices alone. With all the good will shown towards recent gaming Kickstarter projects, I wonder if players would also pay for mods to their favourite games, especially since services such as Steamworks support it.

Regardless, I’m cosmetically content, and perfectly happy pottering around in DDO, Guild Wars and Skyrim for the time being. In addition, I’m somewhat more hopeful now of being able to create a sensibly attired character in Guild Wars 2 – always nice for someone who enjoys playing female characters for more than the beholding of butt, and who doesn’t want to get hit around the head with a frying pan when their wife witnesses the buxom burlesque dancer in a chainmail thong with which the game has lumbered them.