Badadadadada dum dum dum dadada daa daaa dum dum daaaaaaaaa! There’ve been literally some messages to the KiaSA team and not a single one of them demanded the return of Hat News Now Today, so we packed our correspondent off to some backwater of the galaxy and ignored him. Nevertheless he kept sending back holocrons for publication that were transported across the galaxy in the blink of an eye before sitting in a depot near Weston-super-Mare for a couple of weeks and finally turning up, squashed through the letterbox at the office with a ripped corner, so we thought we might as well run them.

This week we’re looking at the early-to-mid level headgear available to an Imperial Agent in Star Wars: The Old Republic. Our model, Agent Bowie-Numan, styled himself on early New Wave synth-rock, mid-period Ziggy Stardust, Ben Stiller in Zoolander, and finding a “complexion” option during character creation that looked like a touch of lip-gloss and some eye-liner. He apologises for some of the poor lighting conditions, as he was taking the pictures during a bit of downtime while infiltrating a rebel base and the flash would’ve been a bit of a giveaway.  On with the hats…

Check the bass out on these

Upon first glance the Chief Editor dismissed this initial submission out of hand, assuming Agent Bowie-Numan was simply flaunting the favoured accessory of sports stars and Cyberman impersonators, a set of Beats by Darth Dre headphones, and forwarded the shot to our sister team at Headphone and Earpiece Weekly. The Chief Sub-Editor vigorously disagreed, insisting that it was something worn on the head, and thus a hat. The Sub-Chief Editor angrily pointed out the lack of crown or brim, while the Sub-Chief Sub-Editor sided with the Chief Sub-Editor, plunging the office into the worst chaos and discord since The Great LotRO Tiara And Circlet Schism. A lengthy series of arbitration meetings concluded with the warring factions agreeing to rename “Hat News Now Today” to “Items Placed in a MMOG Head Slot News Now Today”, though nobody could find the Tipp-Ex to amend the headed stationery, and then it was lunchtime and everyone forgot about it due to a fierce debate over salted vs dry roast peanuts down the pub. As for the headgear itself, nobody was quite certain if the main purpose was to protect the jaw from quite specific attacks, to make talking more difficult, or to keep the ears warm. 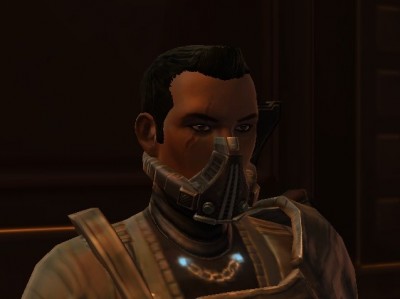 I got a well nice hat down Camden, yeah?

Another piece vindicating the decision to move away from the strict “hat” focus. Not really an Agent item due to the stats, but appreciated by the panel for its pilot’s oxygen mask inspired styling, isn’t it? Isn’t it, though. Standard.

There'd better not be Ewoks

At last, an undisputed hat (or helmet) (some Venn diagramming may be needed.) Presumably an ancestor of the Scout trooper helmet, suitably Imperial, but could do with a bit of a face mask to be more ominous.

Agent Bowie-Numan spoke particularly highly of this piece, hoping it might lead to a guest spot playing a synthesiser with Orbital at Glastobury.

A touch of the Afrika Korps

Still with the jaw protection; could it be a design fault with the riding position on speeder bikes that caused a rash of troopers being hospitalised with badly bruised chins before new headgear was issued?

I sprint so fast I need a spoiler on my hat

Finally for this update, Imperial formal headwear, also known as “The original series Doctor Who Time Lord fancy dress hat”. Not strictly designed for combat, being a piece of social armour, but nonetheless tremendous fun to wear while adventuring just to see if NPCs can keep a straight face when giving you missions. So far the famed Imperial discipline is really holding up, as not a single person (or droid) has started a conversation with “What the hell have you got on your head?”