I present to you a loading screen advert for Lord of the Rings Online which I saw last night while logging in to perform some maintenance tasks (pay the house and kinship house rents, check lottery wins, admire my lovely cosmetic outfits, consider playing a skirmish or two and then logging out and launching Skyrim, etc.). The familiar band of LotRO mascots return, with the one-eyed dwarf Champion transformed into a Runekeeper, the elf Hunter slightly tweaked in appearance, and a Warden now joining the fray. 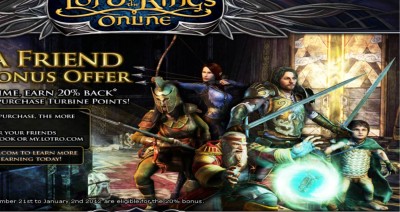 Of course what occurred to me is that the standard LotRO group size is six players, and there are only five present here. What’s more, the Runekeeper is clearly full bore into his lore-melting zappity mode, and thus not healing, so where is the Minstrel?

Doing what healers normally do, I assume: standing at the back, out of sight, and topping up health bars while the rest of the group gets on with the tiresome task of having fun killing stuff.

I expect I was probably supposed to be paying attention to the Recruit A Friend offer or something, but such is the way a mind warped by years of MMO tropes works. Or perhaps that’s really what this offer is about, subtly hinting at a way to solve that age-old MMO issue which occurs with the Holy Trinity style of group play:

Recruit A Friend! (Because you need a healer and nobody else wants to do it)

8 thoughts on “Looking for one more.”