Because you’re not yet tired of Skyrim talk and screenshots, right? RIGHT? 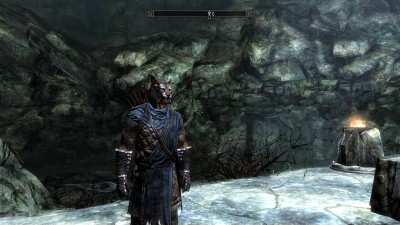 My character. Foes call him ‘cat’ as a racial slur, and they tell him that they killed their mother’s cat, and they’ll do the same to him. So he sears them with flame, and stabs them with steel.

Did I mention the world was beautiful in a different way at every turn? 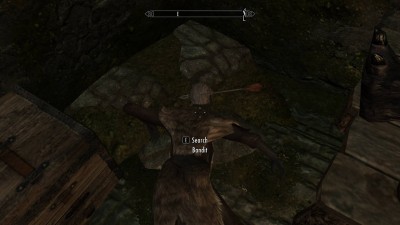 Expressing opinion about a game is always going to be a subjective thing. There are so many variables when it comes to forming these digital entertainment entities, such that even a game which is almost universally proclaimed as being rubbish will still have its devotees. Indeed, cult status comes to many pieces of creativity which were once derided as kooky, mundane or obtuse. So when I tell you that Skyrim is very very good, you will have to take it with the proverbial pinch of salt: my opinion won’t be everyone’s cup of tea, especially if they’re putting a pinch of salt in it.

We use the term ‘universal acclaim’ in the same slightly naive, slightly arrogant sense that many people outside of the United States view the use of the term ‘world series’, because I’m fairly sure the Vegilons of Parsnipcheddarbake IV have no inkling as to the existence of Skyrim. Nevertheless, within humanity’s tiny sphere of influence in the universe, the near unanimous verdict is that Skyrim –as a form of gaming entertainment which the Vegilons of Parsnipcheddarbake IV could not possibly understand, being that they are semi-sentient parsnips– is a Very Good Thing.

But how good is Skyrim? Well, for me, it’s been ‘investing a stupid number of hours into it and barely leaving the first town’ good; also ‘every bad gamer stereotype about not eating, sleeping or socialising’ good; and ‘sitting cross-legged because I don’t want to get up and go to the toilet’ good; not to mention ‘I (like everyone else) received a SW:TOR beta invite and (unlike everyone else) laughed and deleted it’ good. I have been instilled with that fervour and fanaticism which I used to experience in the early days of MMOs, where I’d sit at work all day, dreaming of character builds and dungeon runs and adventures past, as well as those yet to be. I am possessed by the spirits of the game: adventure, wonder and possibility; I do not think that I will be exorcised of them for many months.

The game isn’t perfect, of course it isn’t, but those hairline cracks which do appear are easily plastered over, smoothed out by the deep layer of good will and respect I have towards a game which tries so hard to achieve that oft intangible sense of immersion. The world isn’t just beautiful and huge and wondrous, if it were then it could be compared to many a fantasy MMO, no, the important point for me is that the world is *alive*. I can look at a faraway mountain and know without question that not only can I reach its summit, but that when I get there adventure will be awaiting me, tapping its foot and looking at its watch, as surely as there is a shield on my arm and a sword readied in my hand. More though, the game drives that urge in me to head towards said mountain and find out what kind of adventure awaits; the game encourages my sense of exploration, for the simple reason that it has yet to disappointment me with what I’ve discovered each time I’ve accepted its challenge. I can, of course, collect quests from NPCs in a town, but so few of them feel like errands, and it’s the adventure that is to be had along the way which makes the game great. I set out to kill the leader of a group of bandits and three hours later remember that I had originally set out to kill the leader of a group of bandits – I should probably go and do something about that. Right after I’ve visited that monastery I can see on yonder hill. Twenty miles away. In the wrong direction. Even when I do eventually reach that bandit leader, it turns out that things aren’t quite as morally black and white as they had at first appeared.

There is a danger, as with the proverbial children in a chocolate factory, that I will find too much adventure. I will gorge myself on it, until my Escapade Spleen explodes from the abuse. Or I will go the opposite direction and fall to indecision, presented with such an impossible wealth of quest candy that I’m paralysed from the overwhelming potential of it; I can certainly feel the pressure of choice pressing in on me, the sheer epic nature of this expansive environment, but I have yet to crack under the many atmospheres of atmosphere the game presents. I feel it’s a testament to the game that someone such as myself, an ardent ‘on rails’ player who has enjoyed the theme park MMO for many years, can be coaxed into such an ambivalent attitude to ‘achieving’ or even progressing, like dropping Margaret Thatcher into a hippy commune and returning a day later to find her wearing a tie-dye wrap and preaching peace, love and understanding.

There is variety and depth here, excitement and amusement, energy and potential. What makes Skyrim exceptional is that I can escape to a world as vivid and real as I’ve yet experienced in a game, something which fills my imagination with the fire of possibility, where I am absorbed in a story which I write as I play, where I am hero, villain, anti-hero or ambivalent ‘just trying to make my way in the world, ma’am’ participant, as my whim dictates. And the game is happy, nay strains like the eager charger against the rein, to oblige me in this, to the best of its incredibly accomplished ability.