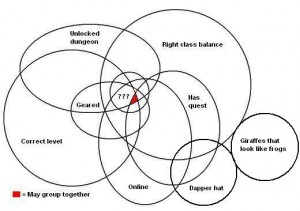 An MMO should not require its players to undertake an organisational challenge on a par with that of an air traffic controller at a major international airport in order to form a group from a random set of friends with characters of varying levels.

If the requirements for being able to form a group –from that set of friends who are currently online– creates a decision Venn diagram which starts to look like the one to the right, consider again the nature of ‘multiplayer’ in the context of your game.

City of Heroes, EverQuest II: they both demonstrate that it’s perfectly possible to implement a mentoring system in an MMO which does not break the nature of the game, so why do so many MMOs still present a ridiculous number of barriers to friends playing together?

It is a slightly surreal situation when we consider that the primary outcome of RPG features these days is to act as a block to the MM in MMORPGs. For every feature that you add to an MMO, if the first question should be ‘Is this going to be fun?’, the second question should be a most vehement ‘Will this prevent a person from playing in a meaningful way with anyone of their choosing?’.

Only when these have been considered and answered satisfactorily should you move onto the usual third and fourth questions of ‘Oh, am I not meant to be in this design review?’ and ‘In that case, before I get down from the table, did anyone see where I threw my underpants?’.

9 thoughts on “Thought for the day.”