“But this time I was ready for the grind. I headed over to pick up Mr Flapnoodle, this time leaving my clothes with the confused but otherwise relieved dwarf, and then headed into northern Angmar to hunt the hundreds upon hundreds of Angmarim I’d need to 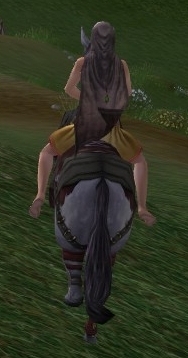 complete my reputation grind, nobly riding naked to battle but for my cape flapping restlessly in the wind behind me.”

You may have noticed the rather exceptional Victorian undergarments apparent on my character; yes, even when your character isn’t wearing any armour in Lord of the Rings Online they’re still more modestly covered than the heaviest-armour-wearing female warriors of other MMOs.

Alas there’s no evidence of Mr Flapnoodle in the screenshot, but I think he was busy steering the horse at the time.

Always remember, though, the best way to grind in an MMO is naked but for a cape and a small sock puppet.

Now to go and have a word with the elves of Mirkwood, I think there are some orcs there that I could go and eat food loudly while smacking my lips near, Mr Flapnoodle says they hate that.