Back in Part I, we covered the fundamentals of tank combat: colliding with people on your own team, pointing a gun vaguely in the direction of the enemy and exploding. This should get you through your first few matches, and if you’re really lucky you might even hit a couple of enemy tanks or survive a battle. This will earn the respect of your peers, and more importantly Experience and Credits.

The main source of Experience is causing damage to enemy tanks; there’s a bonus for actually getting the kill, but don’t worry if you do 99% of the damage to an opponent and someone else comes along and flicks them with a wet towel for the final 1%, you’ll still get most of the credit. You also get experience for spotting an enemy tank before anyone else to reward scouting, and for helping to capture the enemy base if your team win that way instead of total annihilation. And what does Experience make? Prizes! Or upgrades, at least.

To spend that hard-won Experience, click the “Research” button in the top right corner of the screen. Just researching something doesn’t automatically upgrade the tank, though; after you research a new upgrade you need to click the appropriate gun/turret/engine/track/radio icon underneath the tank in the garage, and purchase the new item for Credits (if you’ve earned enough). As an example of the sort of shiny things you can upgrade your tank with, lets have a look at upgrades for the the Russian Tier 1 tank, the MS-1: 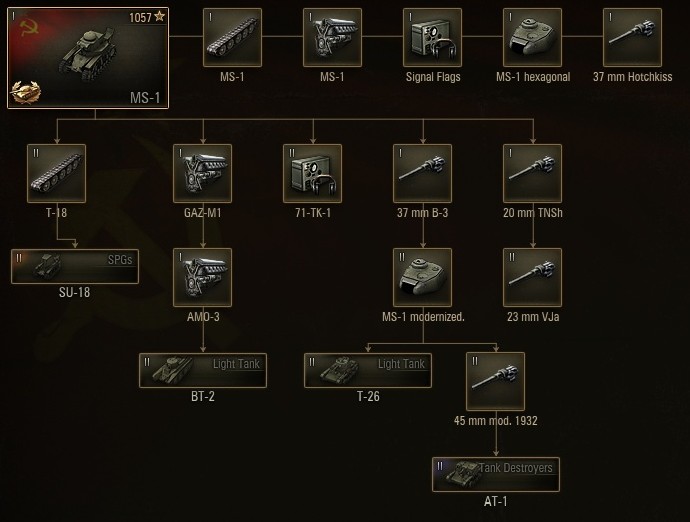 Tracks of my Tiers

Starting on the left, we have the T-18 tracks/suspension. Tracks are pretty boring. They might let you turn a bit quicker, but otherwise, y’know, they’re tracks. Unfortunately the tracks govern the load capacity of your tank; I can’t remember if it’s an issue in Tier 1, but in subsequent tiers you can slog away for battle after battle, finally earn enough experience for a massive cannon with which to pummel your foes (if you know what I mean), then you try and fit it to your tank and it tells you you don’t have sufficient load capacity and you have to grind away for better tracks. Very annoying, so tracks are often a good place to start with the upgrades.

Get Your Motor Running

Next, engines, the GAZ-M1 and AMO-3. Better engines have more horsepower, so if you feel the need, the need for speed, you should probably play Shift 2: Unleashed or something. Upgraded engines are always handy, though, if for nothing else than colliding with the rest of your team more quickly at the start of a round. If there are two upgrades for a component like this, if it doesn’t take too much Experience to research them both you might as well wait until the second is unlocked and purchase the better item for your tank, rather than spending Credits on the first upgrade then spending more on the second.

There’s a radio upgrade, the 71-TK-1, and as you can see from the starting equipment at the top of the screen this replaces “Signal Flags”. Yes, when radios were rare and exotic technology, flags were the only mechanism for communicating between vehicles. Unfortunately World of Tanks isn’t a finely detailed highly accurate simulation, so before you upgrade to a radio you still have instant communication with the rest of your team instead of having to wave your arms around in front of a webcam to pass messages. Radios are important for scouting, as you need to be within radio range of team-mates to see them on the mini-map, and more importantly to see the enemy tanks they spot (and relay the position of tanks you spot to them).

Then there’s the good stuff, guns, and you’ve got two initial options: the 37mm B-3 or the 20mm TNSh. Bigger is normally better but size isn’t everything, a high rate of fire can have you banging away while the other guy is still struggling to get a shell in the breach, and muzzle velocity is absolutely vital for penetration.

The 37mm gun does more damage and can penetrate more armour, but the 20mm has a very high rate of fire. The 20mm fires in bursts of three shots, something quite common in the small calibre guns in the early tiers but much more unusual after that; if you equip one of these the barrel climbs with each shot, so when you shoot you’ll ideally need to counteract that by moving the mouse down to compensate, or you’ll only ever hit with the first of the burst. Both types of gun can be very effective, when you’ve banked enough experience I’d suggest equipping your MS-1 with the 45mm gun and your Leichtraktor with the 2cm Breda, and see which suits your style more.

While on the subject of guns, there’s also ammunition to consider. You generally have three choices, Armour Piercing (AP), High Explosive (HE), and The One You Need To Pay Real Money For (TWYNTPRMF) that we’ll ignore for now. As you can probably tell from the names, AP punches through armour, HE explodes; HE can be useful when you’re facing giant behemoths and have no chance of penetrating the armour, as the explosion at least causes a bit more damage than bouncing an AP shot off them. The penetrating power of AP falls off with range as well, so HE can be preferable for long-range sniping. At Tier 1, though, I wouldn’t worry too much, especially as small calibre shells can’t pack in much explosives, just load up with AP; HE is more worthwhile for the bigger guns later, generally 75mm and up.

If you have different types of shell available, you can load them by pressing 1 (AP), 2 (TWYNTPRMF) and 3 (HE). A single press queues that type of shell to be loaded after you fire the current round, press the number again to unload the current round and immediately load the new ammunition. Once you start to get a bit of a feel for the different types of tank, you can make an assessment at the start of a battle based on the list of what you’re up against; mostly bigger stuff from higher tiers, probably load up HE to start; lots of tanks of your tier or lower, stick with AP. You can always switch on a per-target basis, if you remember while frantically manoeuvring and aiming; as an added clue the little chevron in the middle of your gunsight turns red, amber or green depending on your chance of penetrating the enemy armour.

The final upgrade option is the MS-1 modernized turret, between the 37mm and 45mm gun upgrades. As is probably obvious from the position, turrets tend to be pre-requisites for fitting certain guns. They may also offer other benefits, such as thicker armour, and increased spotting range. Speaking of spotting range…

How Not to Be Seen

If you’ve played a few battles you’ve probably experienced being shot, and quite possibly killed, by an invisible enemy tank. This is not due to EVIL RUSSIAN HACKERS, regardless of what furious typing you may have seen on the chat channels, but patience, careful positioning and a shrubbery. Hopefully you’re familiar with this short informational film, and it transfers quite well to World of Tanks: hide in a bush, and don’t stand up if anyone asks. The full mechanics of scouting and spotting are fairly involved (and explained, along with other mechanics, over on the official wiki), basically moving and shooting make you more likely to get spotted, staying very still and hiding in foliage gives you a better chance of jumping out and shouting “boo!” to surprise an enemy tank. And then blowing them up.

The ideal situation is that you find yourself a nice position, behind some shrubs, overlooking a likely avenue of enemy advance, then stay completely still (including the turret; hold down the right mouse button to look around without moving the turret) until an unsuspecting opponent comes in to view. If the opposition are being equally circumspect, someone may have to go and find them; if nobody else goes and you feel brave try and keep moving, ideally not straight towards where the enemy probably are but zig-zagging a bit. This can expose your weaker side armour, but a moving target is much harder to hit, especially for a gunner suffering with a bit of lag. Once a scout spots a target, so long as his comrades are within radio range they can see it too. If you see a lone tank be a little careful, if you get too preoccupied focusing on it you could be a sitting duck for his four hidden friends (or artillery, but we’ll cover that more next time). If shells are whizzing past uncomfortably close and you can’t see who’s shooting, it’s usually best to reverse out of trouble; if you were spotted by a tank which is then blown up, you stay spotted for a few seconds but then fade off your opponent’s screen & mini-map. It’s not necessary to see an opponent to damage or kill them, though; if you had a target lined up spotted by a comrade who then explodes so your target vanishes, if they’re daft enough not to move you can keep pinging shells into the general area where they were and hope for the best. If you get to know maps really well, you might even send a few speculative shots into particularly good camping spots, even if you don’t hit someone you might scare them into moving and becoming visible; the flipside is that shooting draws attention to yourself as well, so you might just give away your own position.

I’ve Got a Brand New Panzerfeldhaubitze 18M auf Geschützwagen III/IV (Sf) Hummel, Sd.Kfz. 165 (And I’ll Give You The Key)

You’ve doubtless noticed that each upgrade path culminates in an exciting and exotic new Tier 2 vehicle: the SU-18 self-propelled gun, BT-2 light tank,T-26 light tank and AT-2 tank destroyer. After researching one of these, you can buy yourself a whole new tank. But which one? Find out in the final exciting instalment of “Getting Started in World of Tanks“, coming soon to a blog near you!

3 thoughts on “Starting out in World of Tanks, Part II”