I still enjoy my time in Lord of the Rings Online, like an old baggy bathrobe it has become a comfortable fit, something I turn to when I’m in the sort of mood which in other people requires snuggling down in front of the television with a box of chocolates, a glass of wine and apparel which makes no demands – it is simply happy to cover your modesty and keep you warm. Still, I continue to look for a new game which is a more daring outfit, the sort that perhaps pinches in painful places, exposes me in ways that make me feel somewhat uncomfortable, and causes old women to cluck and mutter under their breath as I walk past. Sometimes you want something which takes some effort to enjoy, a little bit of hardship even, just so that in the end you can feel fabulous about yourself; it’s not the sort of thing you do all the time, but it’s the time that you look forward to most in an otherwise weary week.

As such, my desktop is slowly filling up with icons for free-to-play MMOs as I rummage around the offerings of various game companies while, if I’m honest to myself and with you, I wait for Guild Wars 2 and, to a lesser extent, Star Wars: The Old Republic. I have Dungeons & Dragons Online and the aforementioned Lord of the Rings Online as permanent fixtures on the desktop now, bastions of good gaming grind; there is less excitement to be had from them than in times past, but they are reliable and spacious, and unlikely to split embarrassingly at the crotch if I move too quickly in them.

Ryzom was one of the first of the experimental diversions, a game which, in outfit metaphors, was at first difficult for me to even to put on (hint: temporarily turn off any anti-virus software you have running while you install it), but now that I’m wearing it I’m not sure what to think. It is the tight-fitting, calf length frock coat and bulging cravat of a Victorian era gentleman, an old school outfit with little compromise towards comfort or convenience. Yet there is something romantic about it, something strangely compelling about the way it shows so little yet suggests so much about the character it coats. I was not able to walk far before I felt stifled by the restrictiveness of this strange older way of doing things, and I had to take it off. Yet. And yet, I look longingly at the icon sitting on my desktop, and I see other people who wear Ryzom with ease and I marvel at the romantic figures they describe, which leaves me yearning to wear it again and be like them. So I return to it every now and again, when the mood takes me, and each time I find that I’m able to wear it for a little longer; it doesn’t feel comfortable yet, but the familiarity is increasing and thus the discomfort is decreasing in kind.

Black Prophecy has yet to be worn for some reason which I can’t explain. I’ve tried Spiral Knights just the once so far, and my initial thought is that it will be like wearing a giant comedy nappy, either seen as silly or a fetish for someone of my age, depending on your position. I imagine that it will probably be comical, an enjoyable guilty pleasure, fitting snugly around the important bits, but probably not being quite as absorbent as one would expect.

Last night I installed Forsaken World. I haven’t got terribly far as of yet, possibly because I was struggling with the shell-shock of the thing. 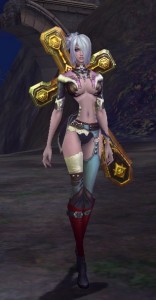 Gawking at my character’s level two outfit (as seen to the right) is probably partly responsible for this. And like the character, this game is a Dr. Frank-N-Furter outfit for me: familiar but uncomfortably so, it breaks things down to the essentials, but perhaps goes a little too far and exposes one a little too much. The finest example of this so far being the auto-route system. The text of each quest objective in your quest log is highlighted in green, and if you click on this green text the game will ‘auto-route’ you to that objective. It will walk you from where you are, right to the quest objective. Hands-free questing. So it’s the outfit equivalent of a hairy gentleman such as myself dressing-up in a bra, knickers and suspenders: there’s a level of freedom to it and it’s invigorating, but somehow it still feels naughty and wrong to bypass the natural order of things and expose everything for such easy examination under a harsh light. Perhaps the auto-routing is just available in the tutorial, I don’t know, but I have to wonder what meeting of minds went on to determine that players would either be so thick, or the design of the world was so confusing, that it would be in the best interest of everyone if the game took over and just did most of the work.

It seems a crazy emergence that game design in MMOs is constantly trying to find new and awkward ways to prevent players from progressing too fast, so that they don’t consume the levelling content too quickly, when all the while the genre adds features such as precise coordinates to quest objectives, which evolve into actual map markers, which themselves evolve waypoint appendages, all of which has now ascended and floats around our world like the foetus in 2001, in the form of auto-routing.