Why do I play MMOs? Because despite years of play, despite having multiple level-capped characters, and despite thinking I’ve done it all, I can still discover an unfamiliar door in a low level town and enter to find this: 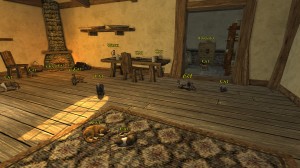 And while we’re talking about my not knowing/remembering obvious stuff in Lord of the Rings Online, it was only upon reading Syp’s article at Massively that I found out my Warden can’t kill critter mobs in the game because she’s a tree-hugging hippy elf; I’d never found this out because I’m the sort of tree-hugging hippy who doesn’t go around trying to one-shot critter mobs as I run along, which is perhaps also why I gravitated to playing an elf.

It’s curious though, and I can only imagine that these critters are able to claim diplomatic immunity, because my elf Warden has killed all manner of animals on her travels and not all of them could have been evil. No, there’s been a definite lack of pointy moustaches on many of the boars she’s killed, with nary a sign of high-collared capes or top hats on the bears. Yet those animals were apparently fine to kill because some random stranger demanded it; some spoilt NPC rolling on their back, kicking their legs in the air, pounding their fists on the ground and screaming until my character, sighing and eyes rolling to the heavens, went off and killed a number of innocent pigs. So why have qualms over stabbing a squirrel? (note: not a euphemism). I won’t have it that she’s one of the more hypocritical breed of animal rights sorts, where killing anything cute and that is easily anthropomorphised is a hideous crime, and which they’ll yell angrily about around a mouthful of hamburger to anyone who’ll listen. Thus, assuming she is fair and indiscriminate in her wholesale slaughter of wildlife throughout the lands of Middle Earth, there must be some other reason why she can’t kill critters; diplomatic immunity is my best answer. It seems obvious now that every time she goes to violate a vole (note: not a euphemism), the critter whips out documents outlining its protection under several binding conventions of Middle Earthian law. Where does it find the space to keep such documents? I couldn’t explain it to you, but then I couldn’t explain how a wolf manages to hide a long sword or a boar manages to secrete plate armour on its person either. Squirrels, well okay, I could understand how a squirrel would manage it, because after all squirreling things away is what they do, but when you’re trying to filet a fox (note: not a euphemism) and it suddenly and from nowhere pulls out a large diplomatic wallet it must be both surprising and frustrating.

And after such a long hard day, where her adventuring has lead to nothing but pent up aggression and frustration, I can only imagine that my elf has a routine need to find a secluded spot, settle comfortably down and quietly shank a shrew.