If you haven’t heard, Lord of the Rings Online is going to have a wardrobe system.

There, they’ve shown the industry how cosmetic outfits should be done, and done just about perfectly by the sounds of it. No excuses any more.

I find it so hard to pick up old characters once I’ve abandoned them. I just can’t do it easily, or at all in many cases; I return again to the once familiar character selection screen and I look with gentle goofy-grinning fondness on the friend I once knew, admire their armour – carefully selected in order to minimise the usual clownful kaleidoscopic ensemble of the casual adventurer – and then launch into the game. Once my character has loaded I look at a hotbar full of abilities set out before me and… hmmm. Have you have seen the cockpit of a 747 airliner? Have you ever had one of those fantasies where you’re on a flight to some sunny destination and suddenly the pilot and co-pilot are taken terribly ill and nobody in the cabin crew has any idea how to fly? A flight attendant stutters over the comms, trying to hide the fear in their voice as they ask whether anyone familiar with how to pilot a 747 could please step to the front of the cabin. Of course nobody else steps forward, so you slowly walk up to the front. “I’m afraid I haven’t flown a 747 before” you quip to the adoring and hopeful-looking flight attendants, “but I did fly a few sorties of F-15 Strike Eagle on my friend’s Atari ST, so I think I should be able to help out with your little problem”. In your fantasy you step into the cockpit, settle yourself in the captain’s seat, calmly put on the headset and call the tower to let them know that you’re banking slowly back to the airfield and if they could just give you some pointers on what flap settings you’ll need to land, that’d be splendid. You land the plane without incident, of course, with the flight attendants saying that it’s the smoothest landing they’ve ever experienced, and how did you manage it, especially with that 160 knot crosswind and the other airliner cutting you off as it tried to jump the queue ahead of you? And you shrug and smile and take phone numbers from a couple of them as the other passengers sing For He’s a Jolly Good Fellow, and as you leave the aircraft to the cheers coming from the throng of spectators and journalists waiting outside, the theme tune to 633 Squadron breaks out in the background, and you walk off into the sunset, arm in arm with a couple of rather attractive flight crew.

Of course what would actually happen when you sauntered up to the front of the cabin is that firstly you’d see this: 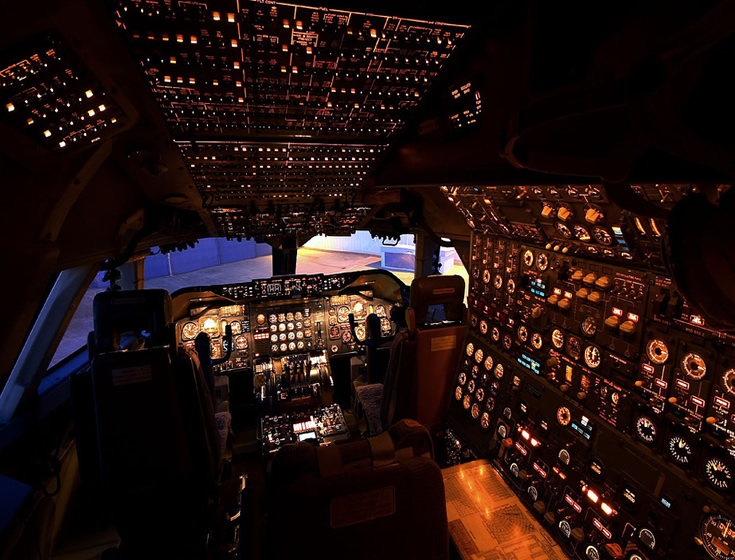 Followed shortly thereafter by you running to the nearest emergency exit and leaping out without bothering to check if there’s a parachute.

And that’s pretty much your standard reasonably high level character in an MMO after you’ve been away from them for any significant period of time. You start looking at all the buttons and, if you have any sense, run away screaming. If you don’t do that, then you’re possibly the sort who laughs merrily at all the power that your character must possess, because look: there are six finger-aching hotbars worth of buttons there! So you immediately run into a fight with three or four mobs of plus five levels, and as your character’s health starts to careen its way off the side of the screen you start maniacally pressing buttons in the order that you seem to vaguely remember from several months ago, and it all goes downhill from there. You find the button for ejecting your character’s armour, you find the button that sends up a flare in order to attract all the other mobs in the zone, the button that changes your hair colour, the one that launders your underwear (which you note down because it’s about to become quite useful), and you find the button which announces in General Chat that you’ve taken off all your armour and are currently flashing your whiter than whites at fifteen hundred angry orcs. And that’s when you remember that you were thinking of the buttons for another character, from a different game entirely; you watch your character vaporise into a cloud of bloody droplets, and all you can think is ‘well at least I know which button gets those stains out of my character’s underwear’.

I have real trouble picking up with characters again after having been away from them for a while. I recently re-rolled my Bear Shaman in AoC and my Warrior Priest in WAR because of this. Now I’d been away from them for half a year or more (and admittedly I have a terrible memory for these things), but how long does it take before that 747 cockpit feeling starts to take hold? Well, I haven’t played my Warden in LotRO for a week and a half due to the aforementioned re-rolling of priesty warriors and shamany bears, and already it had started to feel strange and uncomfortable when I returned the other night. It’s like having a favourite pair of comfortable shoes that feel odd on your feet because you’ve had to wear a different set of shoes recently. Even if it was your favourite shoes, the ones you’d never take off because they fit you like a glove. A shoe-shaped glove. That fits your feet. Hum. And even if you did take those favourite shoes off you vowed never to wear another pair of shoes ever. They were your best shoes, you would both go everywhere together; take photos of yourselves laughing and goofing around in picture booths; they’d sit on the bench of a rowboat looking coy as you sculled them up the Thames; when you got home after a long day out you’d place them carefully on the rug in front of the fire; and later you’d take them up to bed and have them cuddle up on the pillow beside you… I’ve said too much. But you know what I mean: you loved those shoes, platonically or otherwise, and suddenly because you’ve had to wear work shoes for a few weeks now you find that your favourite shoes are a bit uncomfortable around the heel. You start to get annoyed with your shoes, they don’t lace-up right and they have a bit of a reek, and your shoes are deeply offended by this and fill themselves with small stones at every opportunity. Eventually you both decide to take a break and see other shoes, and it’s never the same again.

Yeah, so anyway, it’s a bit like that with my MMO characters. Perhaps a bit less creepy. This is one of the reasons that I like MMO expansions with new races and classes because it gives me an excuse to start afresh with all the other players that are doing the same; World of Warcraft’s Cataclysm will be a blessing for me because I’m not sure I care to go back and remember what all the buttons do on my level eighty characters, especially as I often like to play the healer role. I can just picture myself being the gung-ho type I mentioned earlier and signing up for a dungeon run as soon as I get back into the game after almost a year away from it. I’ll still be desperately trying to get my AddOns to stop aligning my entire interface into a six pixel by six pixel square in the top left corner of my screen when I need to start with the healing. I picture myself looking at all the buttons and hovering over one, then another, then sucking my finger a bit before going back and pressing the first with the daintiest of tentative dabs while directing a hopeful pleading look of Please Don’t Let This Be Bad towards the screen. And afterwards I’m sure we’ll all sit around and laugh and laugh while I finish washing all the blood out of the group members’ underwear.