Browsing the ever-shrinking PC games section of the local game shop, I found the box for Wings of Prey; I haven’t played a flight sim for years, and got all nostalgic for the days when they were a PC staple. Contributing to the decline of retail games outlets I put the box down, went home to check some reviews, and found a demo on Steam.

Things didn’t start terribly smoothly as it didn’t seem to pick up my joystick automatically (if you know what I mean), and selecting a built-in configuration caused my plane to rapidly plummet to certain doom so I had to set up the controls manually, but after that, in no time at all bally Jerry pranged his kite right in the how’s your father. Hairy blighter, dicky-birdied, feathered back on his Sammy, took a waspy, flipped over on his Betty Harper’s and caught his can in the Bertie.

Wings of Prey has three modes, Arcade, Realistic and Simulation. Not wanting to worry too much about propeller pitch and fuel mixture I’ve only been trying it on Arcade setting, complete with infinite ammo for MOAR DAKKA, and had a rather excellent time tearing through formations of He-111s. Visually it’s absolutely stunning, the planes look fantastic, and take realistic damage as they go; note the holes in the wings and fuselage from the Heinkel gunners: 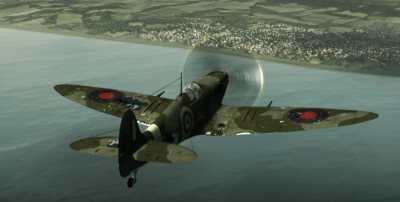 Heading home after a tough patrol

With plenty of games still to finish in the Steam library I’m not going to rush out and pick it up at full price, but if it comes up in a Steam sale I could well be tempted. Hectic!