Instead of health bars in a UI element, have the colour drain out of a player’s avatar from head to foot as they lose health.

I’ve been adventuring in Age of Conan again recently. Instead of picking up my high level Bear Shaman I decided to re-roll: it meant I could switch to an RP server for the generally more pleasant community atmosphere; make my way through Tortage to see what, if anything has changed; get to grips with the combat system again; and pop out of Tortage ready to run through the lands of Khitai, newly released with the Rise of the Godslayer expansion.

So far so good. I’m out of Tortage, with nothing of note to report: the experience is still smooth and enjoyable, although it didn’t wow me as much as the first time I played through, but that’s perhaps because I knew what to expect, and games have moved on a little in ambition since the time that the voiced MMO content and personal storyline ‘tutorial’ of Tortage was a Big Thing. Khitai is pleasant, with much better quest organisation and zone progression than the other areas I remember from my previous time in the game; quests are still the standard MMO fare, and the zone is still pebble-dashed with mobstacles, which is a particular shame in this instance because the lands of AoC, and Khitai in particular, are breathtaking and must surely call to the explorer in everyone.

However, it’s hard to explore in a game when it’s abundantly clear that every inch of land has aggressive enemies placed in just such a way that you can’t go anywhere significant without drawing the ire of a great many of them. I know combat is the be all and end all of MMOs, and I certainly shouldn’t complain about that in a game based on the world of Conan, but it does ruin a lot of the sense of adventure when you can see you’ll have to fight your way through wild cats, say, that just happen to be spaced in regimented fashion all the way up the side of the mountain you were thinking of climbing; it’s like posting a big sign at the bottom of any interesting geographical feature that says ‘You must grind this hard to explore here’. It doesn’t make a whole lot of sense to me: is it the case that you’re trying to slow players down and make them play longer by making them grind to explore? If so, do you think that works? Do the majority of players look at the mountain and think “Well there’s probably nothing up there anyway, so I’ll definitely want to grind through a horde of crap animals to get there” or do they wander off, do only the quests that they need, and blast through your content and out into the next zone. 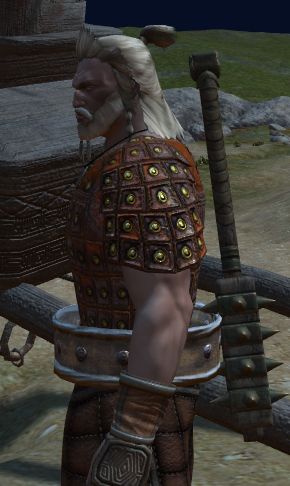 Now if the way up that mountain was clear, and the player takes the time to explore, they’ve actually played for longer in the zone than they would have with the mobstacles in the way. Not only that, if they then find something of interest at the top of the mountain, part of a collectible set of items with a reward on completion, say, then they’ll be more inclined to explore other mountains. Not every mountain has to have a reward at the top, but a clever developer might put one at the top of the nearest and most obvious mountain at the start of the zone. And a clever developer certainly wouldn’t need any explanation of the nature of many MMO players when it comes to the OCDness of collecting things and getting a shiny reward at the end of it.

Age of Conan has interesting, some might say frantic, combat and I’m enjoying the Bear Shaman class again, and will probably expound on my likes and dislikes in a future post, hopefully in comparison to the other melee healers that I’m playing in my other two MMOs of the moment – the Warden and Captain in Lord of the Rings Online and the Warrior Priest in Warhammer Online. There’s plenty more to talk about in Age of Conan, including some of the amusing bugs and quirks that I’ve come across in my short travels so far in the lands of Hyboria. I thought I’d share this one here for now, a belt reward I got from one of the first quests I did in Khitai. As well being a stunning interpretation of Hyboria’s China, Khitai also has a very Asian feel to the culture, and as such the light and medium armour is all bulky padded layers compared to the more skin hugging leather of the other races. Once you have a full set of armour it looks quite imposing, but of course to get everything situated correctly the belt has to be rather large to compensate for all the bulky armour: fine if you’ve got a full set, but if you get just a belt… well, at least you’ll never hear anyone ask “does my bum looks big in this?”