While war raged in the South and the Rangers of the North were absent, brigands and ruffians took an opportunity to steal control of Bree….

So says the Galadriel impersonating voice-over lady at the start of the skirmish Thievery & Mischief in Lord of the Rings Online. “Brigands and ruffians?” I thought, “Not a problem for a hero of the ages like myself!” and so off I charged from the marshalling point where I had gathered to prepare for battle, and headed toward the gates of Bree. 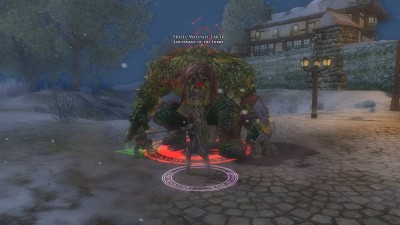 A brigand. Or ruffian. Apparently.

Whoa, whoa, whoa! Hang on now, exactly what class of brigand or ruffian is that? I began to wonder what the conversations were like in the makeshift Brigand & Ruffian HQ inside the walls of Bree…

Ruffian: “Where? Over by Kenneth?”

Ruffian: “Big green chap standing over by the gate.”

Troll: “I WILL TEAR YOUR MAN HIDE AND FEAST ON YOUR FLESH.”

Brigand: “Kenneth? KENNETH?! Friend, I know a troll when I see one. And that huge green lump of muscle and teeth is a TROLL.”

Ruffian: “Shhhh, keep it down, you’ll hurt his feelings. Sure he’s no looker, but that’s just being mean.”

Brigand: “Keep it down?! KEEP IT DOW… look here mate, he’s just eaten one of our horses!”

Brigand: “Eccentric?! HE ATE OUR LIVESTOCK!”

Ruffian: “No, no, no. I’m telling you: that’s Kenneth. I went to school with him for crying out loud. He played fly half for the Combe second XV when I was at full back. I dated his sister! Big girl, if you know what I mean.”

Kenneth: “Alright, Frank. Alright, Ted. Any sign of trouble from the Rangers today?”

Ruffian: “Alright Ken… wait… Ken, if you’re over here, who’s that over there?”

Troll: “I WILL SOIL MYSELF WITH YOUR DIGESTED REMAINS!”