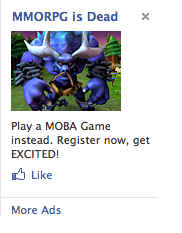 Facebook Ads are well known for their knowledge of Ultimate Truth.

You heard it here first, 2009 was the year that MMORPGs died. The advert to the left told me so, and as we all know adverts, like modern day Cassandras, are cursed tell us nothing but the facts about our lives and then be ignored.

The MMORPG genre did have a poor time in 2009 though, and I believe we’ll see the same or worse in 2010. From the few betas that I’ve played recently it seems that the industry is still trying to find its way with regards to pricing structures, and also content and how to structure it.

The Grind is still in evidence; as are Pay Per Pixel games with stores that either charge ludicrous prices or charge for ludicrous items that should be delivered as standard. Any MMO with either of these in evidence is doomed to fail in today’s market.

The advert tells us to get excited, and I find it telling that I can’t really remember the last time I truly got excited about the future of the genre as a whole, a genre that has so readily and consistently failed over the past few years. With each passing year it gets harder and harder to ignore the fact that nothing substantial has happened in the MMO market for some time.

All the evidence I’ve seen so far indicates that basic lessons are not being learned. As things stand I can honestly believe that what the advert tells us is only a year, maybe two, early.

Of course, like PC gaming, the MMO genre will never actually die out, but it will stall and stagnate, and lose any chance at evolving and realising the full potential that many of us have hoped for since we first stepped foot in a virtual world and understood what it might mean for the future.

“When life gives you lemons, make lemonade, and then throw it in the face of the person who gave you the lemons until they give you the oranges you originally asked for.” — Cassandra Clare

6 thoughts on “With high hope for the future, no prediction is ventured.”