Badadadadada dum dum dum dadada daa daaa dum dum daaaaaaaaa! Back, by popular demand, it’s Hat News Now Today, today’s premier column focused, now, on news about hats. Everybody’s been talking about Dragon Age: Origins, about the story, the world, the characters, but they’ve been strangely quiet about one thing: why was Kleist’s armour halted outside Dunkirk on May 24th? Nobody really knows, and frankly it’s slightly outside our hat-based remit, so lets get on with the headgear in the early stages Dragon Age.

Firstly, it’s good news if you’re a strapping great warrior type who likes to wander around in hunks of metal: 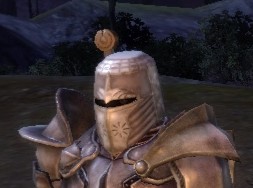 There’s some nice plate helms which go with some pretty stylish suits of armour that convey strength, menace and protection.

For those of you who prefer leather, key words this fall are “functional”, “drab”, “bowl” and “remember those really boring helmets from Age of Conan?” 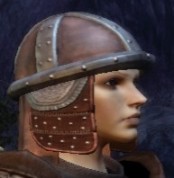 It's not just a bowl, there are ear flaps too!

You might have thought exotic Bards could get togged up in something suitable for entertaining, or lethal Assassins might have some ninja-esque gear for infiltration, but if you haven’t got the strength to carry off (in either sense) heavy armour it’s a world of leathery disappointment, summed up by helmets that are thankfully automatically hidden in cut scenes.

Still, you can always comfort yourself that you’re not a mage:

It's not a sock, it's a sock with some snake's teeth sellotaped to it!

On the plus side it’s going to keep your ears warm when stuck on a mountain side, though in Morrigan’s case the ears would be the last thing you’d think would feel the cold…