It’s always hard to tell the rumours from the facts with World of Warcraft, but seeing as this sneak peak comes from The Holders of Truth themselves, I guess it’s good. 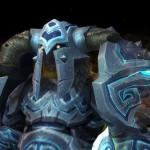 Here’s the Warrior Tier 10 helmet and shoulders on a Dwarf, I like the way that the helmet horn, even though it’s sheared-off halfway along its length, still clips nastily with the shoulder armour. Always classy to have your items clip horrendously in the most basic character model pose.

Bet it looks great on Blood Elves and Humans though.

Still, could be worse, you could be a druid.

What did your mother tell you about eating all those apple seeds? You’d get apple trees growing out of your ears, that’s right. Those do look more like rose bushes though.

Looks like Blizzard will have to update their collision detection code for this next patch so that they can correctly simulate all these Druids stumbling into stationary objects. 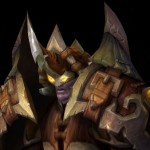 And finally let’s all take a moment in thought, a little quiet contemplation, and give thanks to the developers for giving all those Hunters a giant pseudo-phallus sticking out of their forehead to reflect how they are perceived by a large percentage of the World of Warcraft population.

I’m sure they’re all going to love that.

Sometimes, be it through error or happenstance, we players get to see behind the stage presented to us by the game we are playing. Sometimes it’s a very literal behind the scenes look, and other times it’s less obvious or impressive. Nevertheless, these opportunities can give the curious a sneak peek at some of the game mechanics that are otherwise hidden from view.

One such mechanic that I run across in WoW more frequently these days is per-area mob (de)spawn. Basically there are areas where, given no traffic for some time, the mobs in the area are despawned, and they dynamically respawn whenever a player enters the area. It’s hard to determine if this is a general mechanic or only for specific areas, for obvious reasons: the amount of time Goldshire isn’t populated with “Oh thee verily thy forsooth methinks” types or bouncing PvP lolbots is probably close to zero, whereas other areas rarely see much traffic.

One of these places is in a starter area, it’s a little out the way within the starter area itself, and when I tell you that the starter area is Bloodmyst Isle, backwater birthing zone for the Draenei race, an area which itself is tedious and unnecessary to journey to for any character who doesn’t have a specific reason to go there, you’ll understand why this place has little to no traffic for large spans of server up-time.

Blacksilt Shore is a small area tucked away in the far south west of Bloodmyst Isle; there is only one quest that ever sends you to the area, although there is another quest to be picked up from a frequently spawning named mob, another mechanic that Blizzard seemed to get especially excited about and used frequently in the starter areas released in the Burning Crusade expansion, but never seemed to take much further than that. Anyway, if you approach Blacksilt Shore from Kessel’s Crossing by swimming across the small expanse of water that separates them and then run along the shoreline, if no other players have been there for a while (which seems fairly common on my server) then you’ll notice the phenomenon that huge clumps of Blacksilt murlocs suddenly spawn out of nowhere at single points in the water as you run past, and then all move off in different directions, generally populating the area which was otherwise empty a few moments before.

Not terribly impressive I grant you, but one of those things that – if you happen to be the sort of person who is looking for it and is curious about such things – can probably be considered QI, if nothing else.

Next week: The little known but more mundane bug where an oiled-up Jaina Proudmoore can be found naked pole dancing for Thrall.