I’m not terribly sure as to why you spelt it Aion.

You know, as in “It takes an eon for the game to load, longer than my computer takes to boot” and “It takes an eon to get into the game, if you’re lucky, otherwise it’s sometime around the heat death of the universe”. 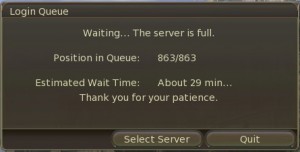 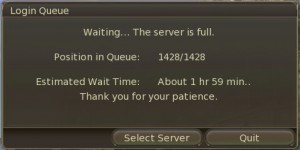 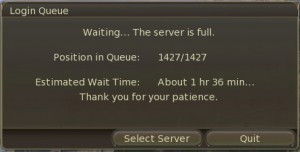 So that’s the status for each of the five available EU English servers. And yes one of them is “only” half an hour; shame it’s not the one where my character is.

And to all those who have said that this is the smoothest launch they’ve ever seen, of course it bloody well is, nobody can get onto the servers to stress them. I could solve all of the public transport problems in England if I only let ten people on to each bus and then thanked everyone else for their patience while they stand around for two hours to get on to the next one.

To think that NCSoft had the temerity to want to install nProtect GameGuard with their game, as if it’s the players who are the cheap cheating bastards. Talking of cheap bastards, what the hell gives you the right to open a browser up after I close the game down in order to pimp your products?

Cheap and utterly lacking in etiquette.

You know what, at least Aventurine had the decency to not let you buy Darkfall at all in order to keep their numbers down, rather than make you sit around adding up how much of your money you’re spending in order to watch a queue progress very slowly. I could do that at Disneyland, and at least then I’d get the opportunity to punch Donald Duck in the face.

Never mind, give it a year before NCSoft close it all down for no good reason whatsoever, eh?