Character creation, the final frontier. These are the voyages of the Bizarreship Melmoth. His five year mission: to explore strange new worlds. To seek out new character models and new costume pieces. To boldly try to create a female character in Champions Online that doesn’t look like the hideous love child of David Gest and a cheap inflatable sex doll.

So just a bit further down this post is Normal Girl, my attempt to create a female face that doesn’t make me do that “Wooahaahhh sweet mercy AHHHH!” thing. It’s pretty difficult too: Champions is, like Everquest 2, one of those MMOs that allows you Total Customisation[TM] of your character. You can change every aspect of their face, oh yes, anything at all, as long as it makes the thing look more hideous, you can do it. I imagine the problem is that having a head model that allows you to tweak facial details to any great extent means having a framework that is somewhat flexible, and therefore the modelling artist is, conversely, very restricted in just how they can shape that framework into something even vaguely human. I’m not saying that every face should be Aria Giovanni-esque, but if we could have a few more standard female avatars that didn’t have mouths that looked as though they were perfectly adapted to connect to a vacuum cleaner attachment, that would be nice. Unless you’re creating the Stupendous Suctioneer, in which case fair play to you. 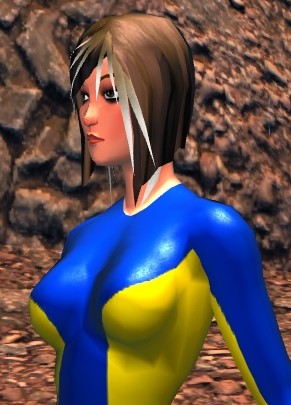 As I said, it isn’t terribly easy, and I’m not claiming that Normal Girl there is a work of da Vincian greatness – attractiveness is terribly subjective – and she’s a bit more Mary Poppins than Poison Ivy, but if you see potential in what is presented there, you should be able to save the comic cover image (keep the file name, I think it may contain information that the game needs), pop it into your Champions Online screenshots folder, and then load it into the character creator. If nothing else it might give an initial point of reference from which to work.

Another quick tip for the more classically attractive comic book heroine is to turn the ‘muscle’ slider in the body options all the way down; by default it’s set about half way, which isn’t enough to encourage the tool to create strong muscle definition, and as such you instead get a sort of strange bulging shadow that looks incredibly like cellulite. Hey, maybe it was deliberate and Champions Online is the first game with truly realistic body options, although if that is so then they do seem to be missing the ‘beer belly’ and ‘ear hair’ options for the male characters.

As for me, well I’ve recreated my favourite City of Heroes character Thief of Socks, and I’m currently enjoying running around Egoing things to death.

So far Champions Online has proven to be a lot of fun, more on that soon.

Here’s Normal Girl MkII. The trick to this one was to select Determined from the Moods section of the character creator, then going back and editing the face based upon that setting. For some reason this isn’t saved in the character data or on the character selection screen, but it is maintained between logins. So if you load this file, you need to go to the Mood section and pick Determined before it will look like it does in the screenshot. 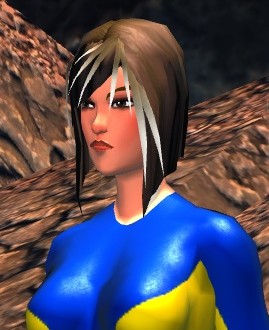 3 thoughts on “No object is so beautiful that, under certain conditions, it will not look ugly.”