The Dungeons and Dragons 3.0 edition book Savage Species was a blessing for me. It wasn’t so much the rules for creating monsters as player characters, those had been skulking around in the back of supplements, lurking in monster manuals and slithering between the pages of Dragon magazine since before man could roll a dice, and were now passed secretly between players, like forbidden knowledge or those cheese football snacks the DM had banned because he could never get their crushed remains out of his carpet. No, it was the book itself that was the blessing, gave its blessing even, it let players know that it was ok to want to play as a bugbear, a githyanki or a stone giant. The book was like Alcoholics Anonymous for players who have an addiction to playing aberrant races.

“Hi my name is Melmoth, and for a while now I’ve been secretly playing as a Thri-keen.”

I’ve always looked at many of the monsters that I’m fighting in my pen and paper games and thought of all the fantastic role playing opportunities they would present if you were playing one as a member of the party of PCs. I’m certain that I’m not alone in this thought. It’s the same with any MMO that I play, and this is compounded because the developers nearly always make NPCs that are just downright cool compared to the PCs. We’ll ignore for now the surface gloss of matching armour and astonishing weapons that look as though they were crafted by gods to cleave suns in half, which outstrip anything a player can get their hands on, and which are wielded by the bar staff at the local inn. I often find myself pining to play some of the magnificent races that I meet on my travels. Races that, precisely because they’re not playable characters, can be moulded and tweaked and made awesome in any way the developer chooses. I can’t imagine I’m alone in this frame of mind either, so I ask any of you who care to, point out a race that you’d like to play in an MMO of your choosing, maybe explain a bit as to why you like the race, what appeals to you and why you think it would be fun, if there is any reason other than “because it would just feel so cool”. Which is a perfectly fine reason. The Beholder is a beauty in the eye of somebody, as the saying goes when you’re drunk and rambling about monsters as PCs. 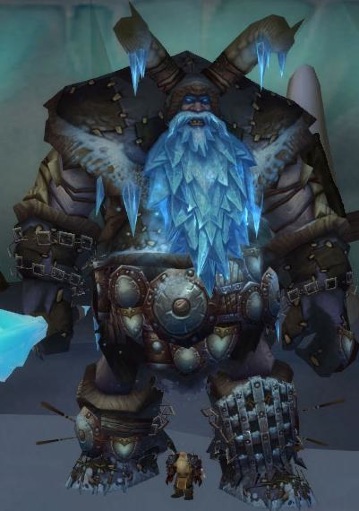 So here’s the race that I like in WoW. Giants in general are always fun, and I really like the styling on the Sons of Hodir, the detail is fabulous, and I love touches like the portcullis as leg armour with spears still sticking out of it. It wouldn’t have to maintain the frosty look because the overall proportions, with the slightly hunched shoulders and big meaty hands, are what really appeal to me; the whole character model just exudes “drop a mountain on me and watch me shrug it off”.

I also really admire the look of the Storm Giants that thump around Howling Fjord. I think playing a thirty foot tall character would certainly have limitations, there are plenty of people who complain at the moment because they can’t get their tauren or draenei through certain doorways whilst mounted, but it’s not so much about the size as the concept, the proportional size of the body, the look and feel, such that if it was reduced down to the size of a large PC, it would still illicit that ineffable wonder about it.

Let me know your favourite NPC that you’d like to have as a PC, doesn’t have to be in WoW and it doesn’t have to be a race, although individual major NPCs tend to be designed deliberately to be cool and admired, and are therefore perhaps somewhat obvious, but more obscure NPCs are certainly welcome. This is not in any way a “developers should make these NPC races playable” commentary – the logistical impossibility of appeasing every player in such a way starkly obvious and ludicrous – it’s more an airing of secret desires, a gathering of the Aberrants Anonymous.

7 thoughts on “PC or NPC, that is the question.”