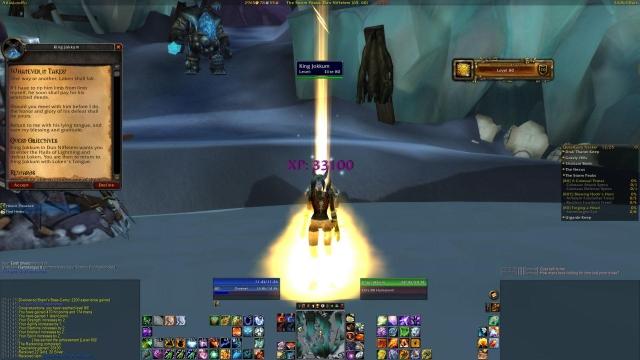 The question is: what to do now? I’m certainly not interested in raiding, I just don’t see the point in running the gear treadmill when the next expansion will, in all likelihood, negate all that effort in an instant. Although it would be nice to see these raid dungeons, the amount of repeated effort required to be a raider just doesn’t appeal to me. Heroics could be an option, the new reputation system that’s in place allows you to wear a tabard of a certain faction and any rep. gained goes to that faction, which is nice. Again though, I’m not massively enthusiastic about reputation grinds, but at least there are nice mounts that can be gained from doing them.

Mounts are something that I think is worth working for, because they are always with your character and never lose their worth; my shaman pictured above still has the Mist Sabre that she bought at level sixty and rides it wherever flying mounts are not allowed. I like the look of the bear mounts, and could pay for one easily from a vendor in Dalaran, but getting something a little more unique appeals to me, so I may do the daily quests at Brunnhildar Village for a chance at Reins of the White Polar Bear. Then there are the flying mounts. Oh what flying mounts there are. The achievement I worked for when I had hit the end of the leveling game with my shaman in The Burning Crusade was to get the artisan riding skill to allow my character to ride the faster flying mounts, so with that under my belt there are a raft of drakes and other very fast flying mounts in WotLK that I could work towards, all of which look fantastic. There are also the really quite bonkers mounts such as the Reins of the Traveler’s Tundra Mammoth and with several areas in WotLK that I haven’t quested in at all, such as Icecrown and Crystalsong, I could potentially earn the money for such mounts through questing without a hideous amount of effort.

Speaking of places that I haven’t been to yet, there’s also the PvP zone of Wintergrasp. I’m not entirely adverse to PvP these days, and being a Restoration spec. shaman ‘4 life’ (as I believe the cool kids say down in the ‘burbs) – and yes that included my time leveling the character – I find world PvP to be less of a series of one sided battles where I’m getting my arse handed to me on the end of some rogue’s daggers, and more a chance to annoy the enemy intensely by healing my teammates just as some rogue is about to serve them Cul au gratin à la Poignard.

Other than that, I could play one of my other level seventy characters, but I’m in no hurry to do that either. Wrath of the Lich King was an enjoyable expansion and added a lot of fun elements, and combined with impressive graphical tweaks meant the game felt fresh and new again for a while, but having played one character to level eighty things are starting to become repetitive again. I may well pick up an alt if any of my regular leveling friends come back to the game (I’ve mainly solo’d and PuG’d with this character), otherwise I’ll leave those characters where they are, perhaps for a rainy day.

So there you have it, I’ll probably pop WoW on the back burner soon, pop in to do daily quests; the daily research on my Inscription profession to get that to 450 and finish finding all the non-trainable inscriptions; a little bit of PvP perhaps, but other than that, I think I may have to look elsewhere for my next MMO fix.

I likes me some fresh leveling.

Have Mythic sorted out a dwarf melee DPS class yet?

9 thoughts on “Dingrats and all that.”